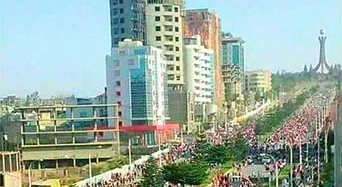 Tigray is the northernmost province of Ethiopia. It is flanked by the Sudan to the west, Eritrea to the north, the province of Wollo and Gonder to the south, and Afar land to the east. The Tigreans number about five million.

It is here the old Axumaite kingdom was once very powerful and had tremendous influence around present day Red sea countries. It left rich architectural and archaeological heritage of rock-hewn churches and monuments. It was a highly literate society, soon developing an alphabet, and it is from the language Geez that modern Tigrinya (alt. spelling Tigrigna), the language of Tigray and Eritrea has evolved. Christianity was introduced in the fourth century to this area. Its monasteries became centers for learning, translating Greek and Hebrew books, including the Bible in the fifth century. By the end of the sixth century Islam was introduced to the area. The Axumite heritage is still important in Tigray today. The oblicks from this era are still standing in Axum today. They symbolize national consciousness for all Tigreans. Today Axum a small town in central Tigray is a tourist magnet attracting tourists from all over the world. The Tigreans also had an important role in defending and defining today’s Ethiopia and Eritrea from colonial powers. Yohannes the fourth, a Tigrean king, defended the area from Egyptian, Italian and Sudanese invaders. The Italians were soundly defeated in the battle of Adwa in 1896. The first of its kind in black Africa for a modern colonial power to be defeated by a poorly armed, but determined, and ill-trained peasant army. Today not only Tigreans, but Ethiopians feel tremendous pride from this. It is one of their brightest spots in history. It has been preserved since then as a symbol of black power over colonial Europe. Present day Ethiopian leaders also started the armed instruction from western Tigray in 1974. That movement eventually ousted the brutal Megstu regime in 1991 and gave Ethiopia its first taste of democracy in centuries.

The Tigreans speak Tigrinya. It has its own alphabet. Tigrinya is derived from Geez, during the 4th century. It is spoken in Tigray and Eritrea. Tigrinya became the official language when Eritrea won its independence from Ethiopia. Tigrinya has been suppressed in Ethiopia until the country changed rulers in 1991. The Tigreans were not allowed to use their language in their local school system or judicial system prior to 1991. But Tigrinya was a medium of instruction in the Eritrean school system when it was under the British mandate in the 40s and later when it was federated with Ethiopia. But King Haile Selassie banned the use of it from the Eritrean school system altogether and replaced it with Amharic. Amharic was taught in schools throughout Tigray as a subject as well as a medium of instruction for all subjects until seventh grade. Today Tigreans are using the newly gotten freedom to use ones own language to improve Tigrinya as a written language. Most Tigreans in Seattle are bi-lingual. Most of them came to the US by way of the Sudan and the former Soviet Union and could speak Arabic and Russian, besides Tigrinya, Amharic and English.